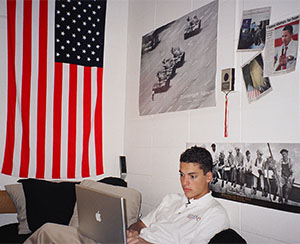 Nick in his dorm room during his first year at college, with clippings containing his own photographs as published in the college newspaper (upper right).

We first meet Ben, D.J. and Nick at “Boys State” – a week’s training where many future leaders (from President Bill Clinton to Astronaut Neil Armstrong to Broadcaster Tom Brokaw) have gone since 1935 to hear current leaders’ advice. This bombastic montage highlights their youthful energy and the film’s theme of patriotism. Returning home with them to small towns, we watch each confront high school’s challenges – personal attacks by rivals, parental divorce, and simply learning to think for oneself. As each speaks at his high school graduation, together they make up a composite conservative boy: equal parts all- American achiever, dorky yet dynamic preacher, and precocious Republican operative. 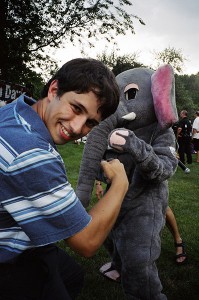 At a campaign event, Ben pretends to “fight” with a man dressed as an Elephant, the Republican Party symbol.

As college begins, our protagonists have already adopted different political labels. Moving into “real” political work, Ben burnishes his Republican credentials by creating negative ads for Ken Cuccinelli, Virginia’s most conservative State Senator (now Virginia’s Attorney General, and a leading opponent of President Obama’s Healthcare plan). After becoming a Democrat in response to the Iraq War fallout, D.J. interns on a congressional campaign. And Nick joins Unity08, an Independent third party in the 2008 election (since reincarnated as “Americans Elect”, an online movement offering a “bi-partisan” choice in 2012). Each leaves his first job with not only political lessons, but also a loss of personal innocence.

The film culminates with the boys’ experience of the first election in which they can vote – the watershed Election of 2008. For two of the three of them, figuring out who they are as people has also brought great changes in their political views and career plans. Ultimately, Ben, D.J. & Nick show us how political change is personal and unpredictable. They provide new insight into historic recent history we all think we already understand, and show how their generation’s politics are far more complex than most realize.