Welcome to the first-ever Changeworx E-News!

We’re a little bit late in moving fully into the 21st Century…but it’s our pleasure to announce our new website, tell you about our current Kickstarter campaign for Follow the Leader, and share other updates about four films currently in production! 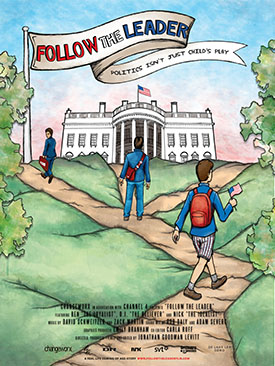 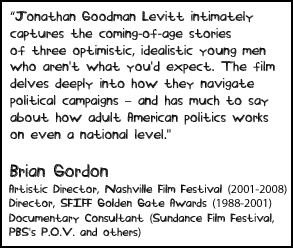 As you may know, a big focus of ours these days is the engagement campaign to complete & launch distribution for our seven-year labor of love, Follow the Leader. As one of our main participants (thank you, Nick!) said in an email to his friends the other day “Jonathan’s poured his heart and soul, not to mention loads of personal money, into this film for 7 years…so I hope you can take just a few minutes to check it out and consider lending your support!”

A heartfelt coming-of-age story with a bit of comedy thrown in, Follow the Leader will be used to spark meaningful & reflective conversations about American political realities in the months surrounding this important US Election Season. Through our linked transmedia project Reality Check Interactive, we’re saying that yes we can talk to all sides, and indeed each of us must engage with people who disagree with us in a fair-minded way for the good of our country.

As bitter political feuds seem to erupt everywhere in public, quietly behind the scenes we’ve been screening Follow the Leader for groups as diverse as Roosevelt Institute (a non-profit carrying forward the legacy of Franklin & Eleanor Roosevelt) and Grover Norquist’s Americans for Tax Reform. You can see more on that, including exclusive video, in our updates on the Kickstarter page next week. We hope you’ll join us & spread the word – a personal email from you to a friend with the Kickstarter link
(www.kickstarter.com/projects/followtheleader/follow-the-leader-and-reality-check-interactive) is the best way to get someone to take action! 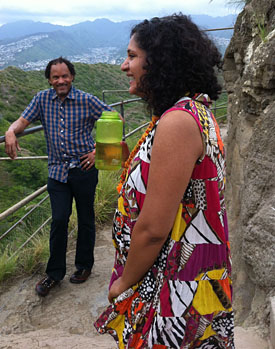 For the past three years, Changeworx has also partnered with Manjusha Films on another timely and critical coming-of-age story – this time set in Pakistan near where Osama bin Laden was killed. Featuring unique access, Two Children of the Red Mosque is the story of a twelve-year-old girl and boy who pursue different dreams after studying at Pakistan’s most notorious Islamic school. In perpetually uncertain and dangerous circumstances, we wouldn’t be making the amazing progress we are lately without the generous support of Tribeca Film Institute, Center for Asian American Media, IFP, Women Make Movies and our newest funder, The Ford Foundation.

As you know, Changeworx productions can take a while – because our passion is for following real characters and stories as they evolve on-screen. And you can’t typically rush real change. But our same “multicultural dream team” – our fearless leader Hemal Trivedi, Mohammed Naqvi, Naziha Syed Ali, Whitney Dow and I – are also finishing up a short film this week for Al Jazeera, about a school principal’s struggles to get the girls in her village educated. We’ll let you know when Shabeena’s Quest is airing and playing at Festivals too later this year.

BUT THAT’S NOT ALL… 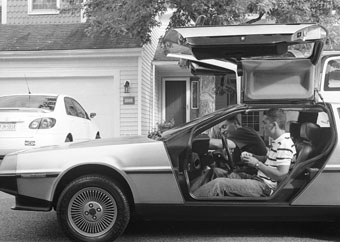 Nick & his dad Louis in their DeLorean DMC-12, as featured in Follow the Leader — and previously in the Back to the Future film series

It’s been an exciting time of new opportunities and expansion at Changeworx as we settle into our company’s broader post-recession mission that goes beyond being a production home for my own directing projects. We’re working on more International Co-Productions – and, in addition to the projects mentioned above, we’re enthusiastic about collaborating with Germany’s DreamTeam Medienproduktion on a biography for American audiences of Doug Tompkins (Founder of The North Face and ESPRIT, turned environmental activist and large-scale wilderness conservationist in Chile & Argentina). Next month also sees the release of a project we’re working on with multi-Grammy-winning jazz bassist Marcus Miller (Producer for Miles Davis, Luther Vandross and David Sanborn, to name a few), timed to the release of his amazing new album
Renaissance. And August also marks the launch of Changeworx Educational, our boutique distribution arm that aims to make sure our work and a few other films that chart change over time are seen in as many colleges and schools as possible.

ONWARD TO THE FUTURE

Future Changeworx Newsletters will go out only each season, and periodically when there are special announcements. We look forward to continuing to update you about our ongoing activities, while also looking back on past productions like Sunny Intervals and Showers – which we’ll be releasing next year in a commemorative 10th Anniversary DVD Edition with exclusive features.

Next week, we’ll be announcing a few events in August and September for supporters of Changeworx and Follow the Leader on Kickstarter. We can’t wait to see many of you in-person, and whether we’ll see you soon or not, hope you’ll keep in touch!

With gratitude and good wishes, we look forward to the changes to come,

Shannon Carroll – Head of Educational Outreach
Shannon previously worked for the ethnographic and cross-cultural film distributor Documentary Educational Resources (DER), and for several production companies in the Boston area. During her most recent work at Film and Law Productions, she produced and edited A Civil Remedy (2012), a short documentary that articulates a vision of justice for sex trafficking victims. She was also a lead organizer for a four-day film forum held in Cambridge, “Human Rights and Sex Trafficking.” Shannon is a graduate of Tufts University in partnership with the School of the Museum of Fine Arts, and has also studied at Emerson College and the Massachusetts College of Art and Design.

Amanda is a transpartisan leader and social entrepreneur with nearly 20 years’ experience in the political sphere and a track record working with politically-engaged non-profits and in grassroots activism. With an extensive background with the political “right,” she’s served on the Republican National Committee and co-created Living Room Conversations with Joan Blades (MoveOn.org’s Co-Founder). A wife and mother of two, Amanda runs her own consulting firm AKR Collaborations, and was recognized by the Independence Party of New York City as a Nonpartisan Trailblazer for her civic engagement work in May, 2012.

Amélie Walker – Web Designer & Developer
Amélie has been constructing a wide variety of websites since 1997 as the owner of Castle Builder Design, which was incorporated in 2005. Among countless other projects, she designed and built all aspects of the Follow the Leader website, based partially on the poster for the film created by artist Charles Ly. Amélie has also been instrumental in consulting on our online strategies overall, including but not limited to this email correspondence you’re reading right now. In her spare time, Amélie is the membership coordinator of Webgrrls NYC and bakes cupcakes.