After living abroad during 9/11 and for nearly a decade, Follow the Leader began as a personal investigation into the politics of today’s youth, whose contradictory views confused me while teaching in the U.S. post-9/11. But rather than trying to define millennial opinion generally, my approach was to follow teens who had signed on wholeheartedly to the “War on Terror” as they became adults. Ben, D.J. & Nick’s stories add new pieces to a media story that has largely assumed millennial youth are simply “liberal”. But providing a fair-minded investigation to the boys’ initially “conservative” ideas was always only part of the point, we wanted to explore how their distinctly different choices on the cusp of adulthood show how kids like them are already redefining what these terms mean as their generation shapes American politics’ future.

Born as Reagan left office and the Berlin Wall fell, Ben, D.J. & Nick were raised to believe in an American exceptionalism that was shattered on 9/11 when we learned that America was great but not invincible (in Ben’s words). As they finish high school and begin college, the film shows moments in their lives during what are typically critical years for the crystallization of political beliefs. Ben, D.J. & Nick’s political obsession does place them in a minority, but their mindsets also distill the political experience of millions of teens at the crossroads of tradition & change – while illustrating the universal process of how people learn to process political ideas. 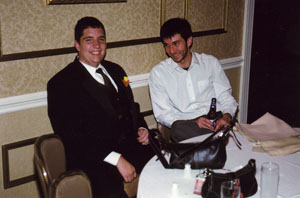 Follow the Leader also encourages readings beyond the classical coming-of-age story on its surface. By sympathetically portraying its characters on their own terms, the film provokes us to reexamine both our preconceptions about youth and conservatives, as well as our own political views. Furthermore, the relative absence women and minorities in a film about future leaders – and the at times politically incorrect views of the characters – asks us to reflect on the entrenched inequalities within the American political system. Did President Obama’s election truly signal America’s political maturity, or instead partly obscure how U.S. politics isn’t as “changed” as many would like to believe? As Election Day 2012 nears, can we think longer-term and consider who we can expect to be America’s new President …in 2040?